Three exchange students studying at TUFS were invited to participate in an international-understanding class for 4th-graders taught at Wakabadai Elementary School in the city of Inagi.  Utilizing a conversation format, the exchange students dialogued with approximately 100 elementary students about the Russian language, its geography, food, and lifestyle, with the opportunity for intercultural interaction.  Two of the Russian participants, Darina and Nastya, hail from the Far Eastern Federal University, while Yaro hails from Russian State University for the Humanities.

Parents at Wakabadai Elementary created an organization for international goodwill, termed Bridge International Parents Fellowship, which conducts a variety of activities.  Among these activities is “Bridge the World,” in which elementary students from 1st-grade to 6th-grade participate in an annual international understanding class, in which they are introduced to the countries beyond Japan, as well as the diversity of skin and eye color, and the diversity of cultural and historical backgrounds, by local residents from those countries.  This allows the elementary students to learn about overseas people and cultural directly.  Recently, Wakabadai Elementary conducted a class about the Kingdom of Tonga, in which the wife of a well-regarded player on the Japanese rugby team who is from Tonga visited the elementary, wore traditional clothing, and showed the elementary students photographs of Tonga, and introduced them to Tongan songs and dancing.

In the latter half of last year, [our office] was contacted and asked if it would be possible to have TUFS exchange students visit the elementary school to participate in similar intercultural-understanding activities.  On occasion, the 4th-grader’s “international understanding time” has free time; last year in December it was decided to invite Russian students this year.   Three students volunteered to participate.  After multiple meetings between the exchange students and volunteers with Bridge, a plan was in place.

On the day of the event, fourth-graders joined in an intercultural-understanding class during the 4th-period, during which they normally study English.  Approximately 100 4th-graders from 3 classes gathered in the gym, and engaged in conversation with the three exchange students.  With encouragement from Bridge members, the students, in unison, asked the Russian students, “Where are you from?” in English.

After that, the Russian volunteers showed the students a PowerPoint they had created together with the members of Bridge, and told the students about Russia in a conversational style, offering a great opportunity for the students to expand their knowledge.  The presentation was as follows.

Including the Question and Answer portion, the activity went beyond the time allotted for the fourth period.

After the class, when it was announced that each of the three Russian students would share lunch with a different class, the children erupted in applause.  The elementary students led the Russian students to their classrooms, where together they shared Japanese-style school lunches.  This was followed by a blizzard of more questions from the elementary students.  In 4th-grade Class #3, two particularly active young boys who’d been practicing for a quite a while got up and did a ‘USA’ dance.

We are indebted to the teachers at Wakabadai Elementary School and to the volunteers from Bridge for making this event possible.

A message that arrived from Nastya in Russian.

During this visit, I had the wonderful opportunity to not only use Japanese, but to talk about my own country.  It was a great learning experience.  I feel confident that the children’s horizons were expanded.  Everyone was really quite friendly; the kids took extra care of me during lunchtime!  I really had a lot of fun, and really enjoyed being able to interact with the children and the parents.  I feel sure the children had lots of fun too. 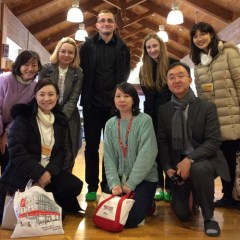 The three Russian students and volunteers from Bridge